Like a meerkat in the Kalahari Desert, a single developer in the DISQO office pokes his head above his monitor. It is 10:29. Soon other heads also rise, scanning the room for company. Bodies lumber out of seats and begin to proceed to a designated room. This is the march of the daily standup.

Why Have a Daily Standup?

The term standup reflects the idea that participants in the meeting should literally stand. Standing increases focus and decreases meeting time. It takes energy to stand, so participants have an incentive to get to the point. At DISQO, individual teams (and even team members) decide whether to stand or sit. However, all teams time-box their standups to keep conversations focused on the team’s work. 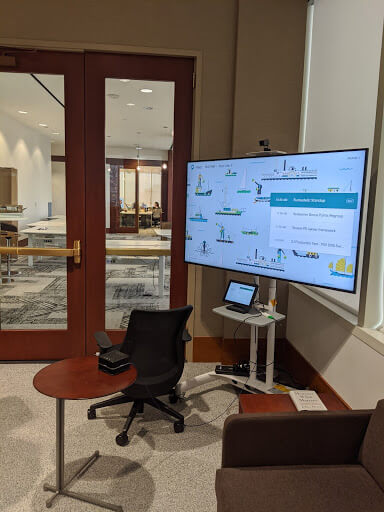 The portable screen indicates that the Funkadelic standup is about to begin. As the Funkadelic team consists of both in-office and remote members, the team holds the standup via Google Hangouts.

At DISQO, core team members (developers and product managers) must attend the standup. Individual contributors to the team, such as developers, speak and share the most. That said, anyone can attend a standup at DISQO. Teams hold no secrets about what they are working on and anyone is welcome to observe. That said, stakeholders are not part of the core team, so their interaction and presence in standup meetings is limited.

When stakeholders do attend a standup at DISQO, they might ask a question or two about a particular item of interest. Otherwise, they simply listen and observe the team at work. Other forms of communication (from an informal Slack message to a formal product roadmap) typically serve to answer questions a stakeholder might have more efficiently than attending the team’s standup.

What Do Teams Talk About During Standup?

Many Scrum resources suggest that during the standup, each team member answers three questions:

In contrast to scrum’s developer-by-developer standup style, Kanban resources often suggest daily standups go ticket-by-ticket. Team members report status and blockers on tickets they are working on only as the tickets are brought up. Promoters of Kanban use the phrase “focus on the baton, not the runners” to explain this style of standup. In a relay race, three runners remain idle at all times while one runner runs a lap with a baton. That idleness allows the runners to rest and prepare for their singular lap. The baton gets around the course faster because the team concentrates on the baton instead of ensuring each runner is always active.

Similarly, Kanban encourages teams to think about how to keep work flowing instead of being concerned that each team member is always active. In standup, this means focusing conversation on features closest to deployment instead of discussing each team member’s work individually.

At DISQO, most teams hybridize the two standup approaches (scrum and kanban) to allow both a personal check-in and a larger view of a team’s progress. Developers and product managers answer the three questions (what did you work on, what are you working on, any blockers?) but also look at the bigger vision (are we on track for our sprint goals or the deadlines we’ve put in place to deliver value to customers?). 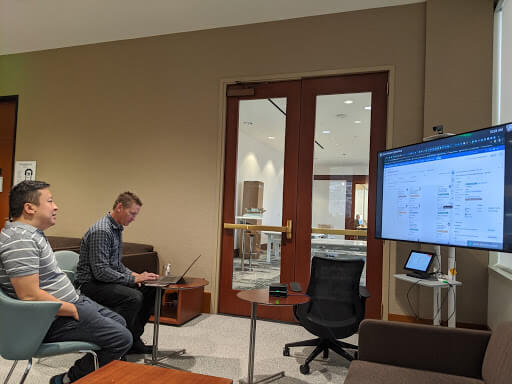 Team Funkadelic keeps track of sprint stories by reviewing the sprint board in JIRA during their morning standups.

Status Report Standups And Other Anti-Patterns We Avoid

Though standups can provide much value to the team, they also can become overly-routine and unhelpful over time. One sign of a poor standup is individuals giving status reports to the product manager or HPI (highest paid individual) in the room instead of engaging in peer-to-peer conversation. To avoid this fate, one DISQO team came up with a clever solution. They rotate the standup’s meeting leader each morning. This gives the team ownership of the standup, prevents one person from becoming the center of the meeting, and gives all team members experience leading the meeting – which also ensures empathy for the standup leader that day!

The PEP (Purple Electric Penguins) team gathers around a physical Kanban board every morning. The leader of the meeting rotates, with each member taking up the responsibility for a day.

While standups serve a purpose, teams can suffer if they use standups as their only means of communication. Team members should be constantly talking to each other throughout the day, asking questions and providing feedback. Waiting until the daily standup to report issues means valuable time lost that could have been spent solving the problem. At DISQO, we ensure development teams are co-located whenever possible to promote conversation and collaboration. Even teams with remote members work during the same hours to encourage synchronous conversations.

The most important part of a standup is that moment, right after it ends, where someone walks up to another team member and says “okay we should work together to figure out that X thing you mentioned” or “what did you say about x? I think I might be working on a related problem.” Standup breaks team members free from the daily grind and gives them a moment to pull back and look at the bigger picture. The conversations that spark from standup lead to discoveries that can keep a project from falling off the rails and serendipities that push a team to the next level of effectiveness. The standup might be time boxed, but its impact resonates across days and weeks.